Knights Meet in Buffalo for Friendship, Art and Humor 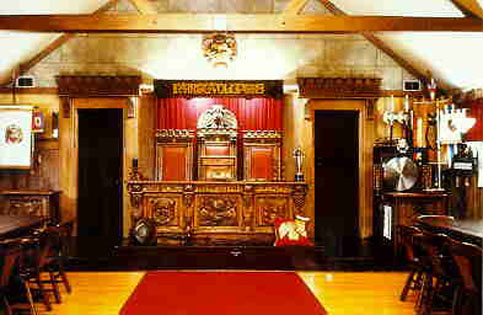 The inside of the Schlaraffia Bisonia meeting hall in Buffalo, New York. The throne, throne chairs, and furniture were designed and hand-carved by two sculptor brothers in the early days of the German-speaking club: Knights Phidias and Angelo.

Buffalo/New York (meaus) Schlaraffia is an all-male international fraternal organizations. It was founded on October 10, 1859 in Prague, back then the second most important city of the Austrian Empire. So, in 2009 it will be 150 years old. Worldwide, there are over 11,000 members in more than 400 chapters, most numerous of which are in Germany and Austria. A 15-member board of directors represents five zones: North America, Latin America, Switzerland, Germany and Austria. The group is based in Bern, Switzerland. There is a club also in Buffalo, New York: its name is Bisonia. And in an easy driving distance are larger chapters in Cleveland, Detroit and Toronto, Canada.

Members, or "Knights", dress up in robes and silk helmets and meet in halls filled with medieval paraphernalia. Addressing one another with humorous titles, the members carry on all conversation in German. Meetings are often devoted to cultural discussions, with members reciting poems they have written or performing their own works on musical instruments. Any mention of religion, politics or business is forbidden. Humor and friendship and an appreciation of the arts are stressed. Rivalry and jealousy have no place at the clubs' meetings.

We don't care where a man prays, or what his politics are

Schlaraffia is an idealistic organization based on friendship and tolerance. "We believe that the human being counts; we don't care where a man prays or what his politics are, only that he performs within our circle", said one of its long-time members. Actually, it was a lack of tolerance that gave impetus to its founding. In Prague a high society arts club, Arcadia, who had among its members nobility from the Hapsburg monarchy, rejected the membership application of one Albert Eilers, who later was selected by the famous composer Richard Wagner to sing the role of Fasolt in Bayreuth. His fellow German artists, performers at the German Theater in Prague, saw the rejection as an act of snobishness, and promptly formed their own club, the first "Schlaraffia".

Schlaraffia--the word is German--is an idealistic fairytale land. Gustav Mahler and Franz Lehar were members of the organization, founded in Prague in 1859. Today the club members range from professors, actors, lawyers, architects, artists, engineers, inventors, and men from all walks of life. They all follow the same tradition as the club founders, poking fun at nobility, even inducting themselves into Knighthood.

In the beginnig, a potential new member come in for three visits as a Pilgrim. If he is attracted to the ideals and play, he fills out a membership application, and becomes a Prüfling, one who is being tested. After a certain period, the members of the club vote on his admission, using black and white balls. If he is deemed worthy, then he is admitted as a Page. After some months, a will moves up to the rank of Squire. Eventually, after proving himself worthy, one becomes a Knight during a special ceremony and a great banquet that follows it. For this event, members from other Schlaraffia clubs arrive to take part in the celebrations. Some of them come from quite a great distances.

The emphasis of the weekly meetings is on entertainment, but only wich is culturally sound, nothing that remotely borders on coarse humor. And yet Schlaraffia has had to face threats from monarchies, along with attemps at annihilation by the Nazis and the Communists. Over the years, the harmless entertainment at the meetings has been viewed as suspect.

In 1935, Hitler directed the Schlaraffia fraternities in Germany--some 144 strong--to rid their clubs of Jewish members. The Schlaraffias circumvented Hitler's orders to remove Jews from the membership list by writing a letter to their Jewish members telling them, "you are no longer formally on the membership list, but, of course, as usual, we'll see you Friday night at the meeting". The Schlaraffia clubs did not heed Hitler's follow-up demand that they voluntarily disband. Then in 1937, Hitler ordered that the Schlaraffia meeting halls be trashed, and the books burned. After the war, members in Eastern Europe had to meet secretly, because the clubs were outlawed by the Communists. 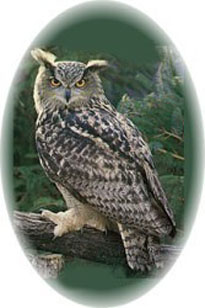 The creed is "Friendship, Art and Humor"

The medieval aspect of the organization requires some getting used to. The ornate meeting room is dominated by a throne and wall hangings that include banners, coats of arms and crests. A prospective member is greeted by men attired in cloaks heavily decorated with medals, wearing helmets and carrying swords.

In a first imprssion, a visitor may think to himself, "how can these serious gentleman act so silly?" But then he sees that the artistic part was done within a framework of mimicking the medieval times when they gave out medals and stars for everything. It was is done with their creed "Friendship, Art and Humor".

Members are addressed as Ritter (Knight) followed by names that are a play on their profession or hobby. For instance, in the Buffalo club there was a Knight Ramses (play on his birthplace in Egypt), another is Knight Merkuri (one who travels much), or Knight Pedant (who requires that all is done correctly). At first, the pomp is a bit of a shock, and a first-time visitor may think that these men are acting foolishly. But once you understand that it is a way of moving away from what the members of Schlaraffia call a 'profane' world, into an idealistic one, it then takes on a different sense. It is refreshing to back away once a week from the everyday life, and step into a life of culture and friendship. The remarkable thing is that age or social position do not make a any difference: people come from all walks of life."

One does not have to be a great intellectual, and actor, singer or a poet. Schlaraffia accepts people as they are. And after a while, you discover that you can do something that you thought you weren't able to do. And so, step by step, you come to appreciate Schlaraffia's way of friendship, art and humor.

The Schlaraffia club in Buffalo, New York is called 'Bisonia'. Its members meet on Friday evenings.

Bisonia was founded on December 17, 1910 by Knight Cerberus. Its colors are green-white-red. Its unique, hand-carved throne and chair are the work of two brothers, Knights Phidias and Angelo, who also designed the entire inside decoration of the meeting hall, and produced all the furniture in their sculpture studio in Buffalo.

This year, on October 10, 2009, the more than 11,000 members of Schlaraffia in more than 260 clubs around the world will celebrate the 150th anniversary of the founding of Schlaraffia. On this occasion, many celebrations and large gatherings are taking place in Germany, Austria, Switzerland as well as in the major cities of the North and South Americas. The Buffalo chapter--not quite as old--will mark and celebrate 'only' its 100th birthday in December 2010, making it one of the oldest clubs in Buffalo.

More information can be obtained by e-mail from John Zavrel at zavrel@meaus.com