Hyderabad has been calling again and after nearly forty years 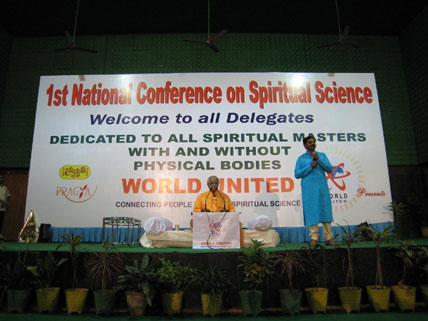 The Himalayan sage Swami Veda at the opening of the 1st National Conference on Spiritual Science in Hyderabad, India.

Hyderabad/Rishikesh (meaus) Swami Veda first visited Hyderabad, the capital city of Andhra Pradesh, India, in 1968. This time his return was on the occasion of the 1st National Conference on Spiritual Science, conducted by the World United organization from November 29-December 2, 2007.

The conference brought together 20 eminent speakers in a common platform to form a spiritual link connecting the various traditions and knowledge they represent. Among the speakers were Lama Doboom Tulku Rinpoche, the director of Tibet House and former personal secretary of the Dalai Lama; Muzaffar Ali Khan, a practicing Sufi and a well-known film director and creator of Rumi Foundation; Swami Smaranananda Giri, the General Secretary of Yogoda Satsang Society of India, founded by Paramahansa Yogananda; Swami Sukhabhodananda, the founder of Prasanna Trust which operates educational schools for youths; and Dr. Amrito also known as Dr. John Andrews, M.D., who served as the personal physician to Osho Rajneesh and directed the Academy of Healing Arts in Osho Ashram, Pune, India. 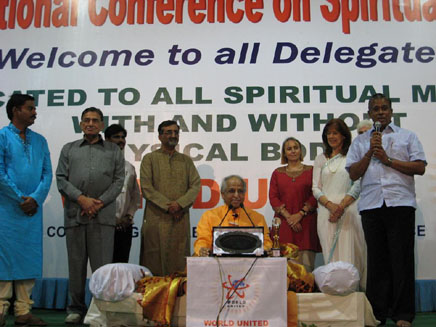 Some of the eminent speakers with Swami Veda (in orange robes) got together to form a spiritual link connecting the various traditions and knowledge they represent.

In Swami Veda's discourse titled "Spirituality, Self-Governance and Effective Leadership" he expounded the Niti-Sutras of Chanakya and demonstrated how they can be realistically applied in today's time. The Niti-Sutras are eight laws of polity composed in the 4th century B.C. by Chanakya, the prime minister of one of the largest empires established in India at that time.

Here we can highlight a couple sutras as translated by Swami Veda:

"The foundation of pleasure, the foundation of comfort is dharma, the virtue." His commentary for this sutra, "Increase your level of virtue, and the application of its principles, and you will find mental peace."

The audience was much moved, and as usual once Swami Veda came away from the dais, a surge of admirers surrounded him taking their first opportunity to meet him closely.

Later Swami Veda participated in a panel discussion of "Which Meditation Method is to be Followed?"

In his reply he said, "There are as many methods of meditation as there are faculties within a human being, and they are innumerable. There are pathways to the different aspects of the physical body, of the 17 components of the subtle body, of the 5 koshas, but that is not enough. The 16 kalas, the petals of all the lotuses but even that is a very meagre list in the Abhidharma system of philosophy of Buddhism. They started making lists with categories, sub-categories with 5,000 states of mind as major headings before giving up. For each of these there is a meditation method. Which one is correct? All are correct. The breath is the pathway through these million-fold methods of meditation."

One special feature for Swami Veda was that he was uniquely honored by the organizers to receive a Lifetime Achievement Award. The organizing secretary, Dr. Yugandhar, received a persistent inspiration to present him with this award, and the audience was greatly pleased to see Swami Veda's life-long accomplishments recognized. 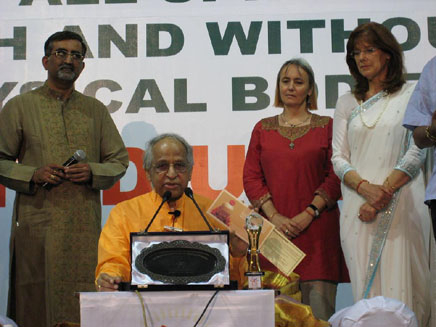 Swami Veda was honored by a Lifetime Achievement Award.

In Swami Veda's last evening he was interviewed by Janet Attwood, one of the speakers at the conference who traveled all the way from Fairfield, Iowa. Janet engaged Swami Veda in a contemporary discussion, which listeners from a broad stratum will find compelling. Janet filmed the interview, which will be a segment from her series "Dialogues with the Masters", and available freely as a podcast from the website - www.janetattwood.com

Because of Swami Veda's profound effect on the conference, Dr. Yughandhar subsequently made travel plans to come to Swami Rama Sadhaka Grama. He has a noble dream to conduct these spiritual conferences on five continents in the coming years to share the message of the spiritual masters on a broader scale. Presently he is staying in the ashram, enjoying the activities, and meeting the students and guests. He has made trips to tour the Himalayan Institute Hospital, Rural Development Institute and the Combined Therapy Programme. Being a general surgeon, he has a keen interest in observing how Swami Rama's vision for holistic health is being practiced.