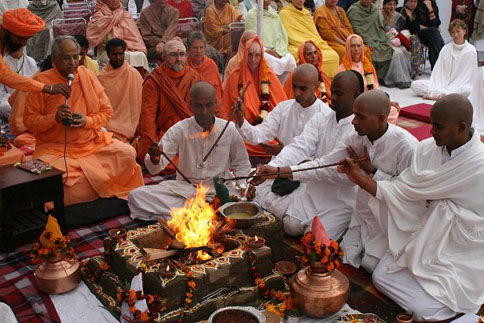 The ceremony for the 5 brahmacharyas. Swami Veda (left, in organge robes) presides.

The three ladies who took the sacred vows of renunciation in the Bharati tradition included:

Donna Marie Anderson, disciple and initiate of Swami Rama since 1971;

Swami Nityamuktananda, a practicing swami of the Saraswati tradition since 2002.

As a part of preparation for the ceremony, the three aspiring ladies spent three days and nights in Swami Veda's sacred fire hut at Sadhana Mandir, performing yagnas and reciting the Gayatri Mantra and the Guru Mantra. This was done for the purpose of purification, until "the outer fire and the inner fire become one, and one does not know where one ends and the other begins; at times one feels as though one's own self is a burning fire."

During this entire time of purification, strict silence was maintained and the would-be sanyasins lived only on milk and fruit. Two swamis and two novitiates from Sadhaka Grama were always in attendance to take care of their needs.

For the would-be 'brahmacharis', five-year vows were taken by

The last two having already taken certain vows, which involved the change of their name. After taking the vows of brahmacharya at this event, all these novitiates would now carry the surname of 'Chaitanya'. Traditionally, they would also wear yellow robes, in recognition of their commitment on this path.

On the sunny, but cool morning of the event, Sadhana Mandhir had been elegantly decorated for the occasion, with a spacious tent set up in the courtyard. The tent hosted the holy Shiva fire in front of Swami Rama's altar, with all the swamis attending the function on one side, the would-be renunciates and novitiates behind the fire, and family members and guests on the other side. A number of swamis graced the occasion. Notable among them was Swami Muktananda from Spain, who sat next to Swami Veda Bharati.

The event started around 9.30 am with Nandi-shraddha, which is a ceremony usually performed after someone's death. Here, in the renunciation ceremony however, the would-be-renunciates performed the ceremony for themselves, as a symbol of their old selfs dying. In Sannyasa, the purpose is to be aware that everything of 'I' and 'mine' is dead. The renunciates make the offerings to their living relations, faculties, senses and to their own selfs in recognition of the fact that their previous personalities are now dead, and that they now seek a new life, with a new, higher purpose. 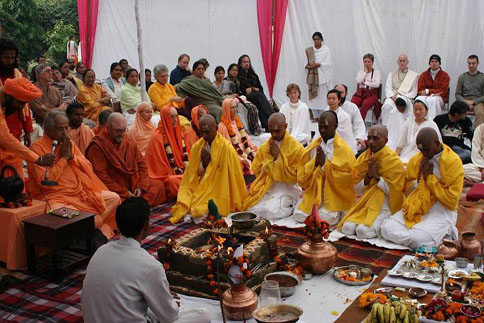 The next ceremony was the Panch-Anga Puja (Ganesh Puja) and the Vrata (the actual taking of the vows by the renunciates).

A small, significant section of the sacred vows are provided below:

"I renounce all with the aim of attaining the Brahman beyond. …

I have abandoned the three desires:

The desire of sex and family (putra-eshana)

The desire of wealth and comfort (vitta-eshana)

The desire of fame and reputation (loka-eshana)

I give reassurance to all beings. Let no beings henceforth have fear from me. Svaha."

The priest says: "Think in your mind, that as waters are poured into water, your renunciation is of Brahman unto Brahman. As mixing of waters into waters is not a mixing of anything into anything else, so your giving away is not-giving away at all. All things that you give away are Brahman. You are Brahman. That to which you make offering is Brahman." …

The renunciates responds: Any acts that cause bondage, which I have committed through ignorance, through confusion or sloth, all those I renounce, here. Abandoning all things, pure of self, without affection, beyond good and evil, I declare that I renounce all passion, anger and such. …

Having made the solemn vows, with the appropriate offerings into the sacred fire, the three renunciates were then invited to take a dip in the holy Ganga (accompanied by a small group of caretaker women). When they were ready by the Ganga, Swami Veda Bharati led the congregation to join the new swamis by the waterfront. It is by this waterfront, a few feet away from the flowing holy water that Swami Veda gave the sacred, secret diksha to the new members of the swami order. This was done by whispering the diksha-mantra into the right ear of the renunciates. For the guests watching this spiritual moment, many stood humbled, some shed tears, but it appeared that each held the event with reverence.

Swami Veda then led the 'newborn' swamis and the congregation back into the tent, and started the Brahmacharya ceremony. Here, each of the young men made their commitment in front of Swamiji who then awarded them their robes, the yellow robes of a brahmachari.

Swami Veda Bharati then started the Bhiksha ceremony, which is the blessing and offering of flowers, fruits and clothes from those present to the new swamis. As this was going on, Swamiji sounded a brief note to the new renunciates. He mentioned that the life of a swami can be quite hard. The swami has to take in curses and give out blessings.

At approximately 2:15 p.m. the congregation sat down to a generous meal, after which the event was brought to a close.

After the event, we caught up with the recently blessed swamis and asked them about their motivation for taking up the renunciation vows.

Ma Radha Bharati said that in 1971, Swami Rama suggested that she should think about taking sannyasa, that her path would be that of renunciation. Such words made Swami Rama a very real presence throughout the years, and influenced the way she lived and the choices she made all along the way. She feels that sannyasa diksha was a deeply humbling experience. It is one more gift from the Guru that allows her the privilege to live a life of love and commitment in selfless service to the long line of those who came before and those yet to come.

Ma Turiya Bharati explained that as she grew up and began to make her own reflections on life, she realized that the Indian tradition was open to Jesus, and that Jesus held the Indian tradition close to His own Heart. "So, I always had a deep, but maybe unconscious desire to integrate the two traditions for myself and in my own person. Swami Veda Bharati aptly summed up my desire for an integration of identity in the Divine with the metaphor of the 'mixing of the waters of the Holy Ganga and the waters of the Jordan' , in which Jesus was initiated into His earthly mission. My embracing of sannyasa, therefore, is a witness to this 'blending'--this communion in the Spirit, the Divine Source. I now feel that I carry in my person the great and eternal truth experienced by our sages and to which Jesus witnessed by his passing through death into Life. 'Tat tvam asi', 'Aham bramashmi ' or as Jesus put it for the people of his tradition 'I and the Father are One' or 'The Father is in me and I am in the Father.' "

Swami Nityamuktananda is a highly respected teaching swami who has been lecturing around the world, especially on the subjects of the Mahabhutas (Five Great Elements) and Yoga Philosophy. She has a Doctorate in Eco-philosophy and in 1997, she was awarded a 'World-Peace Prize.'

Swami Nityamuktananda had originally come to Rishikesh as a guest of Radhe Rani, to attend this renunciation ceremony, but with no plans to be in the ceremony itself. However, as she found out more about the proposed ceremony, and especially how it was going to be held in the traditional manner, she said it became natural for her to take the opportunity to reconfirm her sacred vows, with the grace of SwamiVeda Bharati.

In the tradition of rejoicing for those who are making progress, we share in the joy of this cherished renunciation ceremony with the recently initiated.