The Wagner Pilgrimage city of Bayreuth remains Number One

The boss at the Bayreth Theater Wolfgang Wagner and his beautiful daughter Katharina. Many of Wagner's fans picture her as his successor at Bayreuth.

Bayreuth (bpb) The Bayreuth Theater 2007 has confirmed it again: the formerly small, historical town in Bavaria remains Number One for theater plays. So everyone who is somebody has gathered in July and August in Bayreuth. The German Chancellor Angela Merkel was there again. The Bavarian Prime Minister Stoiber is so to speak 'at home' in the house on the Green Hill. For politicians, Bayreuth is obviously more important due to the attention of the media than for the music. Photos from Bayreuth go around the world. And that goes for all the political parties!

The continuing criticism from Israel that Wagner was an antisemite, "does not interest the media and the music lovers", says a woman visitor. Those who speak this way today, used to be leftists as young people. So years later, these people come to Bayreuth in elegant clothing as people of high rank, while in their youth they used to throw rocks at the prominent people visiting the Wagner theater in Bayreuth.

In Bayreuth, the question of succession is always important. The boss of the theater, Wolfgang Wagner was right to bring into the picture his attractive daughter Katharina. The beautiful member of the Wagner family is a daughter that Wolfgang had with his former secretary Gudrun. He had married her after the divorce from his first wife Ellen Drexel.

The debut of the 29-year old great-granddaughter of Wagner as a director of the opera „Die Meistersinger von Nürnberg" has been met with mixed reception. There were even heard loud protest calls. But even this is a sign of how much people know Wagner's works. 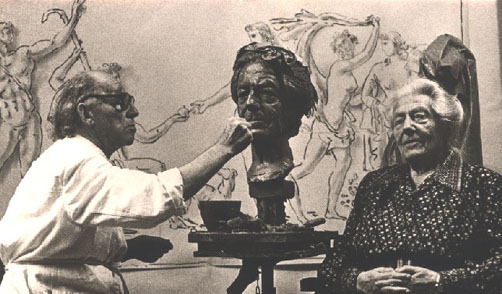 Winifred Wagner sits model for the sculptor Arno Breker in his atelier. The master has immortalized in his busts for the Bayreuth Theater also Wieland Wanger, the composer Richard Wagner, Cosima Wagner and her father Franz Liszt . In the background is the design for a gobelin „Judgment of Paris".

In Bayreuth, people do not like to talk about family dramas. They seemed more interested in small talk about the prominent people attending. What kind of a dress is wearing the German Chancellor Angela Merkel this time? One could depend on the German DCU politician: she shockek the world of fashion by wearing an "impossible" dress, which looked more like a sack.

The official 'tabu' on the Green Hill was to speak about the deceased mother fo the current boss of the theater. And yet it was Winifred Wagner, who kept up the mythology of Wagner and Bayreuth in the Third Reich. It was her good fortune, that the Reich Chancellor Adolf Hitler greatly valued this music. So, this "Grand Lady of Bayreuth" commented once, at a high age after the lost Second World War, in her honest manner: "Adolf Hitler will have in the history of Bayreuth at least the same place as the King Ludwig II of Bavaria, without whose support there would be no Bayreuth at all."

Winifred Wagner remains the outstanding personality of the Wagner Family in the 20th century. And the very old people, who come to Bayreuth, remember well Winifred Wagner. "During her time, everything was much more beautiful and nobler," they say to people. Also there is still talk of the time when the "Begum Agha Khan" came to Bayreuth. They mean the beautiful French woman, who herself pushed the wheelchair of her husband, the fragile Agha Khan, as a "sign of my love."

Tickets remain to be very hard to get

The admission tickets for Bayreuth remain in hot demand. The international purchases are a mystery for the normal person. In Bayreuth, there is a long, long line of people who would like to buy tickets for the coming years. Wagner societies around the world distribute their share of tickets to their members on all the continents. So it can happen that "privileged" people always get a ticket, while the real Wagner fans must wait for years for a ticket.

But for big media stars like Thomas Gottschalk or Roberto Blanco there are no problems in getting tickets. In this age of the media, Bayreuth does not live by the great music of the composer alone. Pomp, glitter, stars and little stars are all a part of it. For some there are even free tickets, eventhough they could afford the expensive tickets. "The show must go on" on the Green Hill.

The Wagner clan does not have to have worries about the future, as long as they keep together, in spite of all the quarrels and intrigues. So much has Wolfgang Wagner learned from his mother Winifred. And so, in this way is the "Grand Lady" even after her death "always present", when the music plays in Bayreuth.