Elvis Presley, 30 years after death: a world exclusive photograph by the King 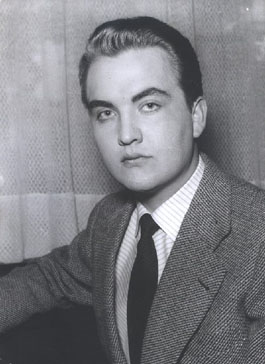 Elvis as photographer: Portrait of his friend Joe, photographed in 1958 in Germany. Elvis himself did the make-up. He used the style from his own Hollywood movies. He argued: "You must look as you really are, soft and handsome."

Berlin/Memphis (bpb) Elvis Presley is not forgotten. 30 years of his death on August 16, 1977, the fans of his music celebrate around the world the high-kicking King of Rock 'n' Roll. Countless millions of people are still crazy about Elvis. Even those who were born after the death of Presley love his music and his life story, which includes the career from a poor fellow to the Mount Olympus of the greatest stars in show business.

The internet bulletin PROMETHEUS is proud to present for the first time a rare photograph, taken by Elvis Presley himself in 1958. It shows his German boyfriend Joe. Elvis met him during his time as a GI in Germany. There are thousands of books published about Elvis Presley, and millions of articles in many languages in the media on all continents. What has not yet been revealed is the secret life of Elvis. That means also his real sexual orientation. The opinion is becoming stronger that Elvis belonged to the group of VIPs, which the famous German tennis-star Boris Becker called "metro sexual". This term can be interpreted as a stage higher than bi-sexual, tolerant towards everybody and curious to test in one's young age new things in intimate human relationships.

Whatever once the baby-faced beauty, with a slick of ebony hair Elvis Presley may have been: his Music has the first importance in the memory of the people. To increase the number of friends and admirers of Elvis on the occasion of this anniversary, new editions of his songs have been published. The TV stations are now showing a number of Hollywood films with Elvis, as well several documentary series. 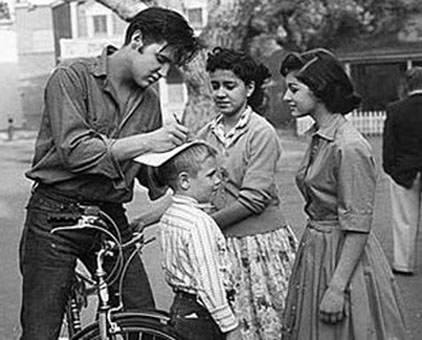 Elvis in Good Old Germany. The photograph shows the famous singer around 1959 as a simple young man, signing autographs for kids on the road.

In August 2007, the German capital Berlin honors Elvis Presley with an exhibition in the "Ellington Hotel". On display are more than 100 Elvis objects, once owned by Presley. Among them are original costumes of the singer, jewelry he used to wear on stage and his sunglasses. Of great interest for the visitors are his pyjamas, which had once covered the beautiful, naked body of Elvis. A red velvet pillow of Elvis inspires the fantasy of visitors, both young and old.

Furthermore, in the exhibition are to be seen for the first time in public some 80 photographs by Presley's concert photographer Ed Bonja. The organisers say that the exhibition has a value of five millions Euro (about $ 6 million). During the course of the exhibition, these special guests are expected: Sonny West (former bodyguard of Elvis), John Wilkinson (guitarist), Ed Bonja (photographer) and the background-singers "Sweet Inspirations".

The German Television and the special anniversary

The German Television ZDF will start broadcasting information and programs on the day of the death anniversary of Elvis already in the morning. The German Rock musician Ted Herold remembers his meeting with Presley during his time as a GI. In those days, Herold was one of the young German singers who made the rock music popular in Europe.

The music shops all over are full of records and CDs in regular and special editions. Their decorations with the photographs of Elvis attract people to go in and browse through them. We can say this: Elvis Presley is still alive in his music.