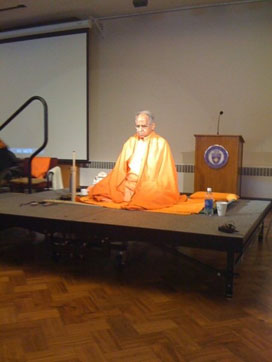 The Himalayan sage Swami Veda lectured on the subject of Yoga Nidra (yogic sleep) in St. Paul, MN in July, 2009.

St.Paul/New York (mea) Something unusual happened many years ago when Swami Rama visited the Menniger Clinic in Kansas. The swami appeared, by external observation and by the readouts from the biofeedback monitors to which he was connected, to be fast asleep and he was snoring. The brain wave monitors in the adjacent room were registering that Swami Rama was producing solid delta waves (1-4 Hz). The brain produces this wavelength when one is in deep sleep that one cannot be easily aroused from. But he was able to later recount everything that was whispered softly in the room where he had been sleeping. How did he do it?   Yoga Nidra.

Yoga nidra is sleep, but unlike the sleep most of us enjoy--sleep that is unconscious, yoga nidra is conscious sleep, meaning that the "sleeper" is completely aware although getting very deep rest.  Swami Rama was a master of Yoga Nidra, and so is his disciple Swami Veda Bharati.

This past weekend, July 17-19, 2009 Swami Veda Bharati and his crew of highly knowledgeable and skilled teachers offered a seminar on Yoga Nidra.   Held at the beautiful St. Thomas University, in St. Paul, in a large room, the seminar was attended by an international crowd of about 100 participants mostly from the USA and Canada, with a large contingent from the Minneapolis area.    Most of the participants had been studying with the Himalayan Tradition for many years, many were teachers, and some were relatively new.

During this three day seminar, there were sessions by such wonderful teachers as Swami Ritavan--who led a long deep relaxation session, Maya (Margo Balog)--who shared knowledge and wisdom about proper body positioning, sitting, and movement to assist one in attaining the state of yoga nidra, and Stoma (Stephan Parker) and Swami Nityamuktananda both of whom shared knowledge and wisdom about what exactly Yoga Nidra is.  In addition to these, which would have been sufficient, Swami Veda Bharati gave two sessions, filled with wisdom, stories, transmitted an experience of Yoga Nidra to those attending.

The sage from the Himalayas also talked about some of the benefits of Yoga Nidra, such as how one who is in that state can access all if his/her memory banks and create an entire literary treatise in his mind in one night, which might take years to then put down onto paper.  Learning can also be vastly accelerated when in the Yoga Nidra state and one gets very deep rest.

In his second lecture, Swami Veda led the entire group in a relaxation leading to Yoga Nidra from the practicum to Mantra 6 of Mandukya Upanishad, as given by Swami Rama in his book 'Enlightenment Without God'. The modern scientific definition of Yoga Nidra can be formulated as follows, according to Swami Weda: ' Yoga Nidra is a state of consciousness, where the brain is producing delta brain waves, but the subject is fully conscious'.

I've been studying with Swami Veda for many years, and have practiced the preparatory techniques to Yoga Nidra, but for the most part the state has eluded me.  The lectures and experiences provided a deeper understanding of Yoga Nidra than I had previously.

Although I did not experience the  Yoga Nidra state at this seminar, what I did experience gave me new inspiration and resolve to attain the goal mastering sleep.