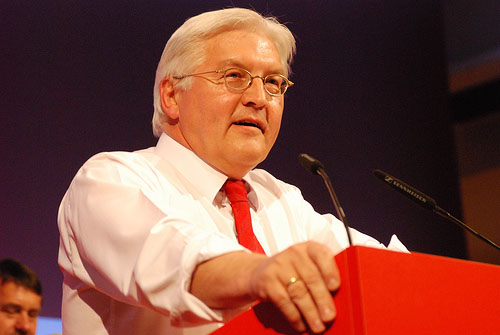 The German SPD candidate for Chancellor, Frank-Walter Steinmeier. If he wins, he says that he wants to eliminate unemployment in Germany. But the Germans ask themselves: "Would you trust this man to do it?" In the copntroversial discussion, people put it quite plainly: "Would you buy a used car from this man?'

Washington/Berlin (bpb) In Germany will be held elections to the Parliament on September 27, 2009. Connected with this will be the important decision, whether the present head of gorvernment Dr. Angela Merkel will stay as the Chancellor, or whether her rival from the Social Democrats, presently the Foreign Minister Frank-Walter Steinmeier, will become the new Chancellor. But the elections in Germany leave most Americans uninterested. President Barack Obama has other worries. And they are worldwide. Whether the Christian Democrat Merkel, or the Social Democrat Steinmeier wins in Germany, ultimately it makes no difference. Every US President must cooperate with Germany.

There is one thing that President Barack Obama and Chancellor Angela Merkel have in common already now: the presently rising unemployment in their countries. From Europe come across the Atlantic bad news. In the European Union, there are presently 21.5 million people unemployed, who are looking for a job. This was reported by the statistical office EUROSTAT in Luxemburg. The unemployment percentage in June neared 9%, compared to 8% a month earlier.

Spain has the highest increase

From the EU members, the unemployment rate were the lowest in the Netherlands (3.3%) and Austria (4.4%), was reported by EUROSTAT. The highest unemployment was reported for Spain, with 18%. Germany is average, with 7.7%.

Election promises of the Social Democrats: Soon, there will be no unemployment

The Social Democrat candidate Frank Steinmwiwr put the issue of unemployment on the first place among the election promises he made in August, 2009. He said that if the Social Democrats will the parliamentary elections on September 27, 2009, there will be soon 4 million fewer unemployed. But such a "promise" cannot be taken seriously by any sensible voter. Most of the time, politicians can never keep the promises which they had made in order to come to power.

The prominent German weekly magazine "Der Spiegel" cites from the Foreign Minister's 'Program for Germany': "We will show how Germany can, with smart political decisions, create 4 million new jobs." And also, "Before 2020, we will eliminate unemployment."

For these fairy-tale promises, the Social Democratic politician received derision and ridicule. The chairman of the Christian Democrats Horst Seehofer in Munich said the the business newspaper HANDELSBLATT: "This is pure Fantasy Land." Also other politicians from the Christian Democrats, Free Democrats, leftists and the Greens also called these promises as "not serious". As was reported in the major daily newspaper 'Die Welt', ccording to public opinion polls taken by the research institutes Emnid and Forsa, Steinmeier has hardly any chance to come to power. But one must keep in mind: voters have the last word.