Obama triumphs in Europe and Near East 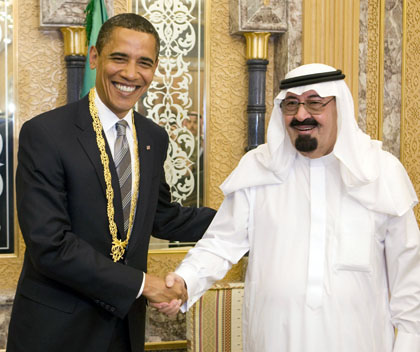 King Abhulah of Saudi Arabia (right) meets the US President Barack Husein Obama on his trip to Near East.

Washington/Berlin/Paris (bpb) President Barack Obama's trip to Europe and the Near East in June once again confirmed: wherever this colored US president comes, he gets an enthusiastic welcome from the public. For the critical observer, this sometimes seems as „ uncanny and unbelievable". The allied governments try to outdo one another in official declarations of friendship and solidarity.

And that is good! At a time of international economic crises, new nuclear dangers and the threats of worldwide actions by terrorists, the US and the leading states of Europe must closely cooperate. The governments hope that this the way prosperity and peace can be preserved for the citizens.

That Germany, according to the opinion of politicians has been the „most loyal and most dependable partner of USA", belongs since the end of World War II and the times of Konrad Adenauer to a good tradition. At the same time, Obama and the governments in USA and Europe should realize: in the meantime, since 1945, two new generations grown up in France, England, Germany and other European countries, who see the USA much differently.

The young people in Europe at the age of around 20 years can be counted among the fans of Obama. He cleverly understands how to present himself in the right light. The youngsters like the show, but the content of his speeches interests them less. Thus, the presidential advisors are faced with new tasks.

During the visits of Obama in Gemany and France in early June, two events stood at the center of attention, which once again forcibly reminded the Germans about their defeats in the 20th century, and again put in their face the crimes that had been commited, more than six decades ago, by their government. The spotlight of the media was mainly on the visit of Obama and the German Chancellor Angela Merkel to the former concentration camp Buchenwald for the enemies of NS regime. German citizens expressed their disappointment that Obama concerned hiself not so much with the people, but rather the „politics of mutual interests".

The German Chancellor Merkel obviously welcomed this chance to be seen side by side with the so-called most powereful man in the world, and used this as an opportunity to "shore up her chances for her upcoming re-election campaign in Germany against the Social Democrats around the German Foreign Minister Frank-Walter Steinmeier. 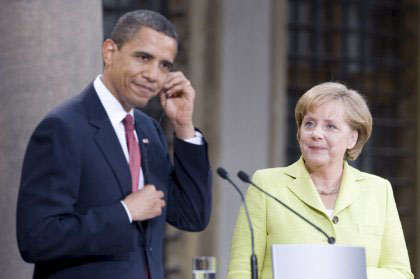 D-Day Celebration without the Queen

At the end of his visit to Europe, the US president Obama (on Saturday, June 6, 2009) called the D-Day in Normandy as Day of Freedom. In his speech on the 65th anniversary, he remembered the achievement of the allied soldiers, and made a connection to the current political developments. The D-Day stands for „the triumph of freedom as well as the road toward security and prosperity, thanks to the transatlantic alliance", said Obama. He and his wife Michelle Obama laid a wreath at the US military cemetery in Colleville-sur-Mer. There, according to official sources, are buried some 9,300 US soldiers who fell during the invasion of the Allied troops in Normandy on June 6, 1944. To the event came also the British Prime Minister Gordon Brown and the British Crown Prince Charles, as well as the leader of the Canadian government Stephen Harper. As was reported from the diplomatic circles, the organizers had originally forgotten to invite the Queen. As the mistake was brought to their attention, the Queen sent „only" the Crown Prince Charles. The Queen was reported to be very „angry"about this official snub. The French president Nicolas Sarkozy, Harper, Brown and Obama praised the achievement on the D-Day in the presence of some veterans who took part in the invasion, in unusualy highly emotional speeches.

The meeting of the statesmen in Near East and Europe with Obama offered an opportunity for a political exchange of opinions about bilateral questions as well as about pressing international themes. These centered around the problems of security, economic stability, preservation of peace and defence against terrorist dangers.