US Ambassador visits the sculptor Kurt Arentz exhibition in Nörvenich

Museum of European Art shows the busts of US presidents 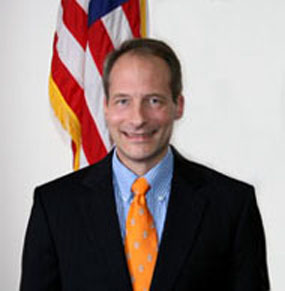 The acting US Ambassador in Germany, John M. König, shows his interest also in the developments in European arts. During his visit to the Kurt Arentz exhibition at the Museum of European Art at the Noervenich Castle near Cologne, the top diplomat was impressed by the cultural engagement.

Nörvenich (bpb) The acting US Ambassador in Germany, John M. Koenig, has visited the Museum of European Art at the Noervenich Castle near Cologne, in order to view the exhibition 'Portraits of our Time' of the sculptor Kurt Arentz from Leverkusen.

During the preview, the high-ranking diplomat was given a tour by the President of the European Art Foundation Berlin, John G. Bodenstein.

Koenig was visibly impressed by the art of the sculptor as a portraitist. "Naturally, I am also pleased that in the exhibitions are also included the busts of the US presidents Ronald Reagan and Bill Clinton", said Koenig. The creations by the sculptor Arentz create a 'very strong impression'.

The exhibition on the occasion of the 75th birthday of the artist will open on Sunday, June 14, 2009 in the Museum of the Noervenich Castle near Cologne. The reception with the artist Kurt Arentz starts at 2 p.m. A new catalog has been published for this exhibition. ( info@europaeische-kultur-stiftung.org )

Friendship with the USA

John G. Bodenstein, the president of the EKS Foundation reported to the ambassador about the personal relations of the artist to several US presidents. "An especially good relationship was to President Ronald Reagan, who had invited Arentz to the United States", said Bodenstein. For Germans, Reagan and John F. Kennedy are still the most popular and beloved US presidents. It would be desirable, if the "new" US president Barack Obama could strengthen the bilateral German-American friendship, become interested in arts and also support a cultural dialog. The EKS has good relations to American artists associated with the US Museum of European Art in Clarence, New York, primarily supported by the efforts and engagement of Consul B. John Zavrel.

The US diplomat Koenig assumed his duties as the acting Ambassador for Germany in 2008. Since he joined the State Department in 1984, he has held a number of high-ranking diplomatic positions in US diplomatic missions in Europe and aroun the world.

Most recently, from 2003 to 2006, he was Deputy Permanent Representative and Deputy Chief of Mission at the U.S. Mission to NATO in Brussels. In Brussels, John Koenig guided efforts to expand NATO's Afghanistan operation from Kabul to the north, west, and south of the country, and spearheaded outreach to new partners in the Middle East and the western Pacific. As Acting Permanent Representative for five months in 2005, he was instrumental in launching NATO's support for the African Union Mission in Sudan. Besides international politics, Koenig is interested in the cultures of various peoples and in art.