The film 'Song of Sparrows' now shown in USA 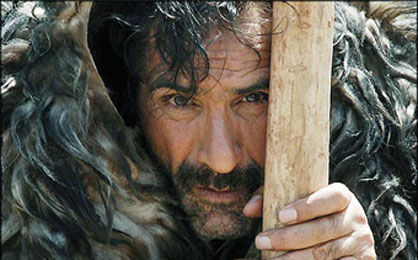 Reza Naji in a frame from 'The Song of Sparrows'

"Some people have tried to describe it as a conflict between tradition and modernity," Majidi said in an interview with Los Angeles Times.

"But the idea [of the film] is that the modernization should be at the service of humanity. Instead, we increasingly find ourselves conquered by modernization. It's like a monster that dominates our lives. Modernization should allow us to lead better lives and give us the wings so our spirits can soar."

'The Song of Sparrows' stems from a visit to an ostrich farm in the countryside, far from the hustle and bustle of Tehran. The film, he says, "is an invitation for us to return back to our shared humanity and values. That's the only way we can stand up and face the difficulties brought on by modernization. Otherwise, we simply become robots."

Majidi, 49, has discovered that the farther he gets away from the complexities of city life in Tehran, "more pure people remain. There is an essence to our humanity that is somehow preserved in all of these places, far removed from the city. You know today, with all this modernization and technology, we are becoming more alienated from one another and ourselves."