Criticism of the Holy Father: Bad advisors and the wrong artists 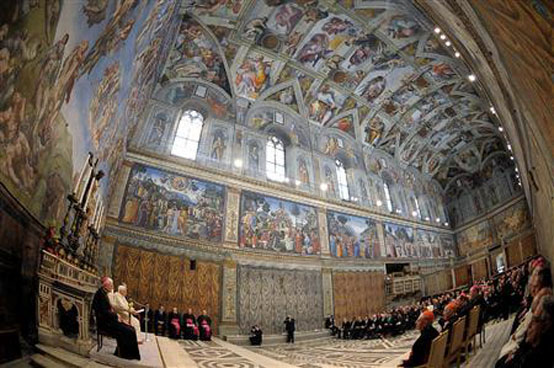 Vatican City /New York (bpb) Pope Benedict XVI met artists from many countries in November 2009 in the Sistine Chapel. The Vatican administration announced that about 250 men and women came to Rome. Others say, it was 260. Anyhow: The chief advisors of the pope celebrated this event as a big success for the Catholic hierarchy. But in the meantime "back stage" at the Vatican and among artists in Europe and USA we can hear heavy criticism: The pope invited the wrong artists; it was not a dialog, but a meeting with the Vatican boss who acted as being the Lord himself.

The Pope doesn't seem to be interested what the artists would have liked to say, but is only interested to proclaim his message that he wanted "to renew the Church's friendship with the world of art." No doubt: a dialog between the pope and the artists is a very good idea. But what the "Holy Father" celebrated on this very day of November 21, 2009 was, according to critical observers, more or less just a "public relations event" for the Vatican.

Sitting in front of Michelangelo's fresco of the Last Judgment, the Pope reflected on the beauty of God and on the connection between beauty and hope. Posing as a kind of an "eternal Majesty", the pope told the artists: You are the custodians of beauty: thanks to your talent, you have the opportunity to speak to the heart of humanity, to touch individual and collective sensibilities, to call forth dreams and hopes, to broaden the horizons of knowledge and of human engagement. Be grateful, then, for the gifts you have received and be fully conscious of your great responsibility to communicate beauty, to communicate in and through beauty!

The opportunity for a historical day was lost

Saturday's event in the Vatican marked both the 10th anniversary of Polish Pope John Paul II's 'Letter to Artists' in 1999 in which he spoke of the Church's "need for art," and the 45th anniversary of Pope Paul VI's original meeting with artists in 1964. But the highly spiritual and wise Message of Pope John Paul II can hardly be compared with what his successor of German origin now had to say.

The result of all the activities of the cultural advisers of the pope is this: the opportunity for a historical day in honor of Benedict XVI was lost. And the pope is not innocent in this matter. He did not take the case seriously. But he read a speech of his ghostwriters, filled with the names of artits whose names he may not have ever heard before. The disaster began already with the invitation policy. It is unclear how many artists of all kinds (including comedy and critical movie makers) were invited, and how many actually came. The Vatican administration said that around 500 were invited. But half of them refused to accept the invitation, or did not react at all. It is said that mostly artists living in Italy came to the event, since they do not have the high cost of traveling.

It is considered as absolutely wrong to invite in the Name of the Holy Father artists who are known as enemies of the Catholic Church, and criticize it in movies, theater and boulevard comedies. And it is also wrong to invite any artist who is proud to be Godless, not religious or a critic of the Jewish, Moslem or any other serious and traditional religion and religious belief. Those artists who lead a moral life and work in the spirit of Christian morality were ignored by the pope. And this is a deep insult.

The Pope is not responsible for everything

In the controversy, the admirers of the Holy Father say: The pope is not responsible for all the mistakes that happened in connection with the meeting with artists. It may be true that a pope is many times also a victim or a prisoner of his own administration. If they block information, the pope is helpless in the Vatican Palace. The danger comes up for the pope to become a puppet.

Therefore, it may be permissible to say at this point:

Dear Holy Father! The best and real dialog with artists is to give them commissions and work, fairly paid. This means also art commissions from the Church. The admiration of uncounted people around the world for the popes and the Catholic Church has its roots also in the fact that no other existing religion in the world has ordered, collected and preserved so many works of art as the Vatican. And this are great merits of the past art loving popes, and we thank them for this again and again.