"Golden Triangle" and its role in the "Salvation of Art".

St. Petersburg/New York (mea) In the article "The genius and the divine", Salvador Dalí wrote:  "God and genius--that is an inseparable unity. There is a man of genius!

There is Dalí! Infinitely, like the divine spirit, the man of genius exists. If the divine Dalí--who is also a tool of eternity--through his cometlike course over the earthly existence--taught the privileged ones a new dimension of seeing his brilliant works, then that is a splendid achievement. And these find their reflections in other highlights of the art of all centuries and millennia. For me the man of genius who manifests himself among the sculptors is especially Arno Breker, as also perhaps Michelangelo. Who says: "Dalí has never known Michelangelo and known Breker too late?" Wrong! Dalí met Michelangelo in the flame of genius, which surrounds him also with Breker and which continues to glow in the painting of Ernst Fuchs. We are the Golden triangle --Dalí-Breker-Fuchs. No matter how one may turn us, we are always on top."

At first glance, the words "God and genius--that is an inseparable unity" and "Infinitely, like the divine spirit, the man of genius exists", look like some literary exaggeration, but if we consider it properly, we may realize that it is actually a Credo, a Manifesto of the art group, which was actually a real, heroic Order of knights of art. "Infinitely, like the divine spirit, the man of genius exists",- sounds like a divine Sutra, like a verse from the Gospel. It shows how the "Golden Triangle" saw the nature of their own art, the source of their work, which in the"infinite" space appears as the Transcendence. They realized themselves as "also a tool of eternity".  They felt themselves to be an instrument in the hands of the Divinity, and the real Author, the real Artist is God, the Creator, who through Dalí, Breker and Fuchs opened His great secrets of the "new dimension of seeing".

The "Golden Triangle" of Salvador Dalí, Arno Breker and Ernst Fuchs is a very unique art formation, the role which is much underestimated in the world art history, and which must be reconsidered. The importance of the wonderful group was in its joint force, which comes from the Ineffable transcendent, in the fusion of all the greatest talents, which has become a message of art salvation to the whole world of art, to the cultural development of the global society's consciousness. The "Golden Triangle", - this is the point, at which we have to look again, as one who is lost looks at a milestone, which pointed the world art development in the right direction, and which was unfortunately ignored. Usually, people think that Dalí was only joking when he wrote in his "Diary of a Genius" that his goal was to "save Art", that it was a sort of his everlasting epatage to proclaim that he was going "to rescue modern painting from laziness and chaos". Some people also think that Dalí was just an art clown, and he just said a lot of funny things.  He also classified the various kinds of farts, walked around with an ant-eater etc., but they are mistaken! We must understand that it was rather an activity of a Holy Fool, than a sort of a primitive PR promotion company for art business or entertainment. Those were the words that came directly from the heart of the great Master, from the heart, which suffered and bled profusely. Dalí was a far more complex man than people usually think him to be. He was a religious Catholic Christian and a great workaholic. A shallow interpretation of his art activity, especially today is unacceptable. If we closely analyze his art position, then we have to realize that he didn't make jokes about the salvation of Art, not even when he said that he was happy that his was a Spaniard.  But, how can a rescue of Art be connected to the question of ethnicity? We will realize the significance only if we consider properly the national Tradition, its scale of values and its defensive cultural mechanisms.  Saying that he was happy that he was born as a Spanish man, he already pointed out that he was not some "common man" with so-called "common human values",--some abstract humanoid, who is full of doubts about its sex, ethnic and religious self-identity. He is a Spaniard; it means he is an ethnically Spanish, Catalan male person, culturally belonging to the ancient and very rich tradition of his nation, that he is definitely a Catholic, which means that he knows what can be called a sin. All these aspects of his pride "to be Spanish" are a coded scale of values, which he inputs into his art. These values are values of a real, particular and alive human being with an authentic cultural background; not some faceless "common human values" of a man who has no cultural roots. A "common human" looks like a piece of wood, without any roots and branches; it is just "some wood", a piece of lumber, but not a particular tree of any valuable kind that looks absolutely unique, and is connected with the Universe by its branches on the top and by the roots on its bottom, and which stays green in the sunshine.  The same values, related to their personal self-identification, we may see in the art represented by the two other members of the "Golden Triangle": Arno Breker and Ernst Fuchs. One, the most important sculptor of the German Third Reich, and the other--a son of a Rabbi, who was in his childhood saved by a miracle from death in a Nazi concentration camp.

Actually, a connection between these two personalities with the mutually exclusive cultural and historical backgrounds can seem incredible, but something,which lies above these differences, some higher principles, could unite them in spite of all the obvious oppositions.

So, what was it?  It is, of course good to mention that all of them belonged to the Roman Catholic Church, but I guess it was also an idea that man is of a super-national and super-cultural essence. That at the highest point of the human consciousness "...There is neither Jew nor Greek, there is neither slave nor free, there is neither male nor female; for you are all one in Christ Jesus ..." Some followers of the Advaita Vedanta philosophy, and perhaps some followers of other esoteric systems can recognize in that statement their own values as well.   So, the uniting idea was in the idea of man, but of a man who is still a man with all his social, cultural, gender and ethnic unique properties, that one, which is still not a totally enlightened and reached the condition of the "god by grace", a man which has the Mind of Christ, where there is "neither Jew nor Greek", but strives to the Ultimate state. It is an idea of a man who is still on the path, and still fighting for perfection.  The "Golden Triangle" in the statement of Dalí is actually a credo: "God and genius--that is an inseparable unity." And we can understand it as the given connection of the genius of their joint Art power in God. Nevertheless, we also realize that the genius is a "message" from the heights, at the same time as a human fight for the spiritual perfection it is a movement from the bottom. The Synergic principle can be understood also via one more amazing note of Dalí, to people who had no idea about their inner direction, that it is no need to be frightened by perfection, because it is unattainable.

So the great idea of the "Golden Triangle" was on the path to spiritual perfection of a given, culturally holistic man, which never violated and refused his cultural self-identity, a genius, which is inseparable in the divine unity with the Existence. "Golden Triangle" by its own being stated that the striving for the total perfection can be manifested in many aspects of a human activity, as well as in the sphere of Art itself.  Arno Breker said: "What is great art? I believe that the development of abilities to depict in art makes fundamental statements also about the development of man himself".  These are ideas of a Neo-Humanism, - a new belief and hope for the holistic man, remaining as an island in the storm of a global Art movement, which had been undergoing a strong aggression of a dehumanization and a Counter-Cultural movement of Modernism. It was an epoch of Nihilism and a deconstruction of all living and natural shapes in Art; it was a cutting of all the cultural roots and branches. Modernism has become a really totalitarian method of a making of a unique man to be a faceless lumber, - soulless material for the giant concentration camp of the Multicultural Globalism, where everyone must wear similar clothes, eat similar food and watch the same movies. Postulates of Modernism have a direct connection with Liberalism, - a philosophical and political movement, also an ideology which states that individual freedom of the person must become a social basis and a new economic and world order.

Liberalism "liberates" a man from his "traditional values", it emphasizes a position of an independence of an individual from his religious, national, cultural, race and even sexual properties, as well as it "liberates" a man from his God. Modernism did similar things, but in the field of Art. It destroyed all the objective criteria of evaluating art. Now each dilettante could announce himself as a great artist, if only the new rulers of the world art process would appoint him. Modernism has "liberated" an art from the classical concepts of beauty and aesthetics, and of course from the demand of an artistic skill, which could represent the "development of abilities to depict in art" and which would "make fundamental statements also about the development of man himself".  So, the ideals of the "Golden Triangle", the ideas for the salvation of Art of a culturally holistic and unique man, which could potentially reach the highest spiritual and divine perfection, totally confronted the "Art discourse" of that time, which has become also a sort of a repressive ideology, forbidding and marginalizing all that would not fit into its tight frames. 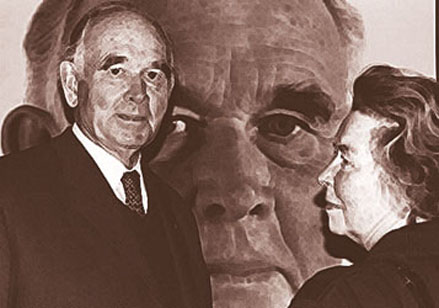 Collectors Peter and Irene Ludwig in 1996, in front of their portraits by Gottfried Helnwein, at the State Russian Museum, St. Petersburg.

The "Golden Triangle" has become almost a secret art structure, sponsored by a great art collector and art enthusiast Peter Ludwig, and connected to the "Order of Alexander the Great". The small group of the greatest genius artists continued to create the highest examples of Fine Art even under strong moral suppression and misunderstanding. It is remarkable what happened when Ludwig at one time tried to display his and his wife's portrait -busts by Arno Breker in his art museum in Cologne. The press violently pounced at him and started a real hunt, accusing him of no more and no less than fascism! I think that we have to accept the fact that it was necessary to have great faith, and the highest realization of the truth of one's own position to continue the art activity within such an enemy art surroundings.

Most of the members of the wonderful art group passed away, and nowadays we have only the precious presence of Ernst Fuchs, who continues to teaches others. The subject will be considered a bit later in the long story about the struggle for Art and its real heroes.

Oleg Korolev is a Russian Mystical, Religious and Visionary artist, painter. His art works have been on display in private and corporate art collections in Russia, Europe, North America and Australia. The official site of Oleg Korolev: http://www.koro-art.com