My fateful walk from Stuttgart to Ditzingen 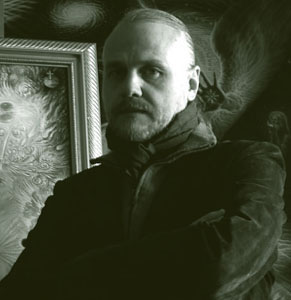 Once upon a time in the land of Baden-Württemberg and on one of that summer's Sundays I went for a walk. My road lay from Stuttgart to Ditzingen direction., the weather was pretty nice and I have decided to go on foot to see the beautiful landscapes situated in the area. I stopped at a crossroad and asked some passing man what was the right way. He was an Afro-German (or Afro-African?) young man, obviously a postman... He, smiling, pointed me to some hills on the horizon with his finger, and I started on my way.

I remember that I went on the country roads winding amont neat German fields, saw some tractor drivers with red necks and thought that all people of this profession looked the same way all over the world. Maybe the difference was in the eyes of the people: they were very full of life and of a light blue color, and I thought that perhaps in the Crimea the farm workers' eyes have no color ... or if they do, then it is of some hue of rotten grapes. I went alongside the fields and suddenly realized that I have lost my way. The sun was almost setting and it was starting to getting dark. I went across some bridges passing over small forest rivers, and saw some wonderful golf courses, some Porsche cars standing near by, and some beautiful white and brown horses, grazing on the meadows.

In the twilight, all of a sudden I felt that somebody is overtaking me very vigorously on the left side. I turned my head to see who it was, and was astounded ... it was some totally naked human being, like essence of a gray color walking straight, moving his body somewhat mechanically in the manner of the ancient Egypt, and pacing toward me, actually very fast! His legs were enveloped in the gray dust of the road, and on the athletic body was resting a head... oh my God! ... a head of an eagle! It was a shock... I started to pray... In my heart I was shrieking: Raphael!

Finding myself standing still, without moving, I have never seen anything like that ... Well.., moving forward, very soon I found myself at some local train station ... and there was one man... it was also an Afro-German (or Afro-African?) young man.

Later I looked for descriptions of similar mystical visions in specialized literature... All what I could find is the famous Egypt's god Horus , as well as Assyrian god Nisroch... But they depict Horus with a head of a hawk, and Nisroch, with an eagle head, but still dressed in some kind of long clothes. The only thing equal to my vision image that I found was a sculpture by Arno Breker, "Young Europe"... it is not just similar, it is the same in all details..! For several years I have been interested in the art life and philosophy of this great sculptor... and all what I can say about him for sure: he was a real visionary, a mystical artist. His art was not connected with some Nazi political propaganda. It was used for the goals, of course, but only as a by-product. And it was also amazing to find out that Ernst Fuchs, one of my direct teachers, was his friend and a member of the Golden Triangle of Dalí, Breker and Fuchs. The greatest Mystical art group, associated with the Alexander Order!

This is how my short walk from Stuttgart to Ditzingen, undertaken about 12 years ago, brought me to this point in my life.

This is the first of a series of articles by the Oleg Korolev, an artist from St. Petersburg, Russia. He will introduce his viewpoints on art in general, his way of perception and on that basis he will start an explanation of his views on what is happening in art of Russia, on the 'Visionary art', as well as on art around the world.