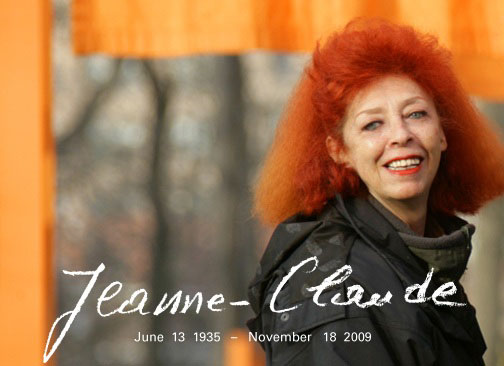 Jeanne Claude photograph from the website of Christo. The red hair of the artist was a kind of a trademark of the lady. The spectacular art-projects that the couple has performed in many countries in the world will remain in the memories of her fans.

New York/Berlin (bpb) The famous Jeanne Claude, wife and partner of Christo (The Wrapper), died at the age of 74 years in USA. The American artist and resident of New York City died suddenly on November 18, 2009 as a result of complications due to a ruptured brain aneurysm. Christo announced on his homepage that he was "deeply saddened by the passing of his wife, partner and collaborator".

Christo and Jeanne-Claude met in Paris, France in November, 1958, sharing the same date of birth. They have worked together for 51 years, creating temporary works of art. After the death, the family declared: "It is Jeanne-Claude's wish that her body be donated to scientific research". A memorial will be announced at a later date.

The same day of birth

According to their official biography, both were born on the same date in different countries and later both became US citizens. Christo: American, Bulgarian-born Christo Vladimirov Javacheff, June 13, 1935, Gabrovo, of a Bulgarian industrialist family. Jeanne-Claude: American, French-born Jeanne-Claude Denat de Guillebon, June 13, 1935, Casablanca, of a French military family. She was educated in France and Switzerland. Died November 18, 2009, New York City.

The most popular project became the wrapping of the REICHSTAG in Berlin, Germany. Both artists worked on this happening since 1971. But only in 1995 the art project became reality. "It was a very difficult affair", remembers a witness of the spectacle. For more than two decades it was not possible to persuade all the authorities in charge of granting the permission...

Due to the support of the media, and specially by the Bonn Correspondents Stephan M. Vogel and Joe F. Bodenstein, finally the miracle happened: With the support of the President of the Parliament, Professor Dr. Rita Süssmuth (Christian Democrats) Christo and Jeanne-Claude worked to convince the elected Members of Parliament, going from office to office, writing explanatory letters to each of the 662 delegates and making innumerable telephone calls and conducting negotiations. On February 25, 1995 after a 70-minute debate in the Parliament and a Roll Call vote, the German Parliament allowed the project to go ahead. The German Chancellor Helmut Kohl and many members of his political party were against the Wrapping of the Reichstag. This historical building goes back to the times of the German Kaiser, Hindenburg, the Weimar Republic and Adolf Hitler.

Christo and Jeanne Claude were the winners. More than 100,000 square meters (about 1,100,000 sq feet) of fireproof Polypropylene fabric, covered by an aluminum layer, and 15 kilometers (about 10 miles) of rope were needed. The wrapping began on June 17, 1995 and was finished on June 24. The spectacle was seen by 5 million visitors before the unveiling began on July 7th.

The Alexander Order Pour le Mérite for Arts and Science (OAG) intends to commission a bust of Jeanne Claude to keep her memory alive. "The portrait can be placed in the Alexander Garden of the Museum of European Art at Clarence, N.Y.", said Consul 'B. John Zavrel, the Chancellor of the international Order. Supporters of this idea can ask for more details at zavrel@meaus.com . Portraits of the late Salvador Dalí and his beloved wife Gala, both Knights of the Order, are already displayed in this public garden. Among the OAG Knights are Sir Peter Ustinov, Ronald Reagan, Nancy Reagan, and Professor Hermann Oberth, "the Father of Space Flight".