The Nomads of the Himalaya 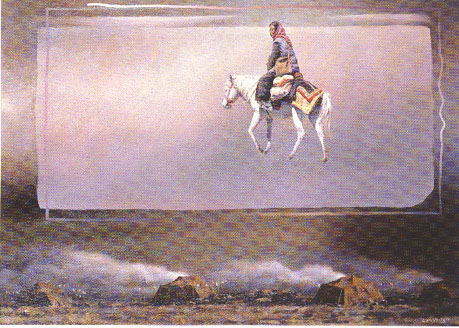 Owen Sound/New York (mea) At an altitude of 15,000 feet in one of the world's harshest environments, the Canadian artist Allen Smutylo had the rare opportunity to experience the highly complex and rich culture of the Changpa people, a small tribe of Tibetan Buddhist nomads.

In day-to-day life, sacred rituals, community celebrations, or fending off wolves and snow leopards, he observed and documented their unique lifestyle on the roof of the world. With these tribes, he found a well-adapted, proud people inextricably tied to the Himalayan mountains and to their herds of grazing animals. He also discovered that the nomads' ability to sustain themselves, as they have for 2,000 years, is now at risk from a rapidly changing world.

"... We moved down and out of the valley of Spanchen and into a much grander river basin. We turned west and gradually the procession was silhouetted against the grey, east light of predawn. Fifty horseback riders, the newborn and the aged, nursing mothers and young men, assorted dogs and small children emerged out of the land's darkness:two hundred people and a thousand yaks in a scene as old as the thread of human history.

The caravan moved at a slow but steady pace. At daybreak the sun's rays were caught in clouds of wind-whipped dust on the lee side of four thousand trudging hooves. A tapestry of nomadic life gradually came into view--archaic, textural, and tied to the quickened pulse of hope and fear. The sound of singing, whistling, and coaxing was countered with snorting, barking, and baying. Blackened cauldrons, kettles, burlap and silk, grain and rice, old Tibetan Buddhist prayer books, rich milticolored carpets and blankets, yak-hair tents, brass ladles, wooden poles, butter churners, adn other valued possessions were bundled and roped to the massive black forms of the male yaks..." 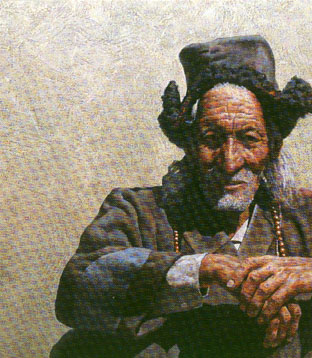 Over 130 color paintings, etchings, drawings and collages further bring to life the amazing story told here. Smutylo's incisive portraits of the Changpa tribe and their world reveal a fascinating people, inseparable from their faith and tied to the rugged landscape of the Himalaya. At the same time journal, travelogue, memoir, ar book and essay, 'Wild Places, Wild Hearts' reveals a little known and truly exceptional culture--one that nourishes the eye, the mind and the soul.