In Germany: Präsident Obama was compared to Hitler

Helmut Schmidt, as "the wise elder statesman", is allowed to say anything 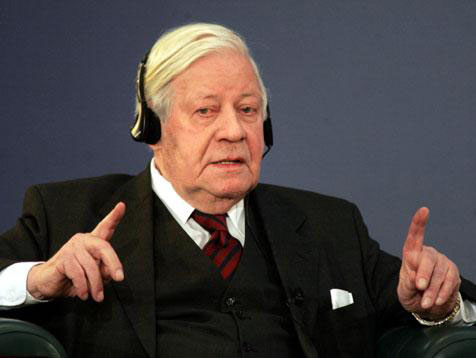 Helmut Schmidt is an often seen guest in political TV shows. The German statesman is also the most popular still living past Chancellor. He has always proved his solidarity with the USA. In a recent TV interview, he compared the first colored US President Barack Obama to the dictator Adolf Hitler. His open and critical words are meant to "promote the German-American friendship".

Berlin/New York (bpb) Millions of people have followed the program of the German talk-show host Reinhold Beckmann on February 22, 2010. On the show, the former German Chancellor Helmut Schmidt had both wise words and sharp criticism. He also said his opinion about the first colored US President Barak Obama.

In the discussion about the role of charismatic politicians, Helmut Schmidt presented the comparison with the dictator Adolf Hitler. At the global dispute about Obama, Afghanistan, China, the Holocaust and Israel, Helmut Schmidt made quite clear: in the politics, he does not like any "charismatic idealists" like Barack Obama, "who always promise more than they can fulfill", and at the same time cause "more suffering" than they themselves think. As examples he then named Hitler, the Soviet communist dictator Josef Staling and Mao Tse-Tung.

The reaction to such words was surprising: no outcry went through Germany! Had the German Foreign Minister Guido Westerwelle said something similar, he would have had to resign his office. But Helmut Schmidt, with his life experiences of 91 years, can say (almost) anything. And mostly he say the same, what the older generations know and think from their own life experiences. The popularity of this statesman is well above the political party affiliations.

A great response in the media, and sympathies from the Germans

The response of the media was positive. The leading German weekly news magazine "Der Spiegel" wrote the following about the TV event: "the atmosphere of the wisdom of old ege is not disturbed, even when Dchmidt compares Barack Obama with Hitler." Had the Foreign Minister Westerwelle said this, there would be calls for his resignation, a trans-Atlantic crisis and a parliamentary investigation", was further written in the magazine.

Then, the author of the article in Reihnold Mohr added: " When Schmidt compares Obama to Hitler, one does not need to get excited. It is known, how he means it. He is a branded child of the 20th century, in spite of his oposition to the Nazis, a lieutenant in the German Army, with the German sense of duty, who until the end of the "Third Reich" had not known anything about the concentration camps.

Reinhold Beckmann is one of the top TV talk show hosts, who, through being respectful toward his guests, can often elicit unexpectedly open comments. With a calm voice, Beckmann creates an atmosphere of confidence. The absence of the public in the studio contributes to making the illustrious men and women more open in their answers.

Schmidt came to the TV show together with the Jewish historian Fritz Stern. The 84 year old has been friends with the German politician for many years. In spite of quite different biographies of the two men--who lived in a century with two world wars in Europe and who have different viewpoints on various topics, both of them have been engaged in promoting democracy, freedom and peace. The lady journalist Nina Holley wrote in the popular newspaper "Hamburger Abendblatt" that Beckmann's talk show with Schmidt and Stern was a "star performance" for the media.