Dalí's Painting on Loan to Foundation 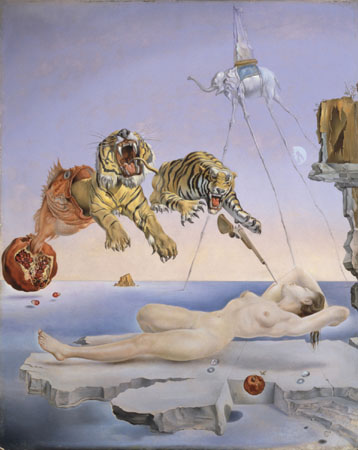 'Dream Caused by the Flight of a Bee Around a Pommegranate One Minute Before Awakening' by Salvador Dalí.

Madrid/New York (mea) The Fundació Gala-Salvador Dalí presented the work 'Dream Caused by the Flight of a Bee Around a Pommegranate One Minute Before Awakening' (1944), on loan from the Thyssen-Bornemisza Museum in Madrid, Spain.

The oil painting will be exhibited at the Drawings Room (number 6) of the Dalí Theatre-Museum in Figueres from February 9 to May 2, 2010. The painting depicts a woman (Dalí's wife, Gala) sleeping while sunbathing naked during a calm day on rocks floating over the sea, possibly at Port Lligat.

An elephant with incredibly long, extremely thin legs walks across the sea's horizon while carrying an obelisk. Near the woman float two drops of water and a small pomegranate.

From a larger pomegranate comes a fish that spews a tiger from which comes another tiger, while in front of that second tiger a rifle's bayonet touches the woman's right arm. It was painted while Dalí and his wife Gala were living in America.

The bayonet, as a symbol of the stinging bee, may thus represent the woman's abrupt awakening from her otherwise peaceful dream. This is an example of Sigmund Freud's influence on surrealist art and Dalí's attempts to explore the world of dreams in a dreamscape.

The bee around the smaller pomegranate is repeated symbolically. The two tigers represent the body of the bee (yellow with black stripes) and the bayonet its stinger. The fish may represent the bee's eyes, because of similarity of the fish's scaly skin with the scaly complex eyes of bees.

The elephant is a distorted version of a well-known sculpture by Bernini that is located in Rome. The smaller pomegranate floating between two droplets of water may symbolize Venus, especially because of the heart-shaped shadow it casts.