The Funeral of Horst Niesters 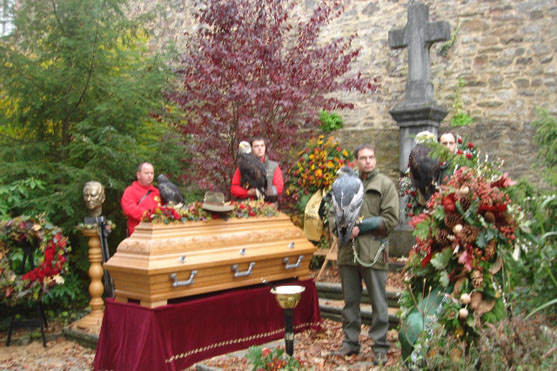 The coffin of Horst Niesters stood under a hunderd-years old stone cross. Falconers with their birds of prey on their forearms formed the honor guard. The beloved photographer of wild-life and founder of a wild-life preserve is known as the "King of Eagles". On the left in the photo is the portrait-bust 'Horst Niesters', created by Kurt Arentz.

Köln/Hellenthal (bpb) The international photographer, breeder of eagles and nature preservationist Horst Niesters has found his last resting place in the Catholic cemetery in the historic town of Reifferscheid, Germany. At the funeral on Saturday (October 24, 2009), numerous guests from Germany and abroad honored him with the last respects. Among them was also the interior minister of Nord-Rhein Westfallen, Ingo Wolf. As the European Art Foundation reported, some 300 guest took part at the farwell ceremony. Among them were many men and women from the region where Niesters did his life work--the international Wildlife Preserve Hellenthal. Here he also devoted many years to the breeding of eagles and falons. Many filled up the street leading up to the church.

High ranking guests from Germany and abroad were also personal friends of the deceased, and of his charitable activities. From Brussels came the Ambassador of Germany to Belgium, Prof. Dr. Reinhard Bettzuege. From far away came, among others, the spokesman of the European Art Foundation Joe F. Bodenstein (Berlin-Bonn), the sculptor Kurt Arentz, member of the CIC and event-manager Fee Vogel (Berlin-Munich). At a number of events organized by her, the performances of Niesters' eagles from Hellenthal never failed to impress the onlookers.

The International Council for the Preservation of Wildlife and Hunting (CIC) was represented by Peter Sapara (Heilbronn) and the CIC member, publisher Dieter Schütte from Cologne. The CIC member Arentz laid down a magnificent wreath, which was dominated by branches of oak leaves, so much liked by the deceased in his lifetime. The fresh branches came from a large oak tree in the park of the Noervenich Castle.

Falconer Karl Fischer, a friend and co-worker of the deceased in the wildlife preserve Hellenthal, arranged a worthy funeral ceremony: the oak coffin stood on top of a hill, under a century-old stone cross. From there, one could look down across to the 800-years old church of St. Matthias, surrounded by the peaceful Eifel landscape. Falconers--men and women--of the wildlife preserve Hellenthal as well as their colleagues stood guard with their birds of prey on their forearms. From here, the funeral procession went to the cemetery. 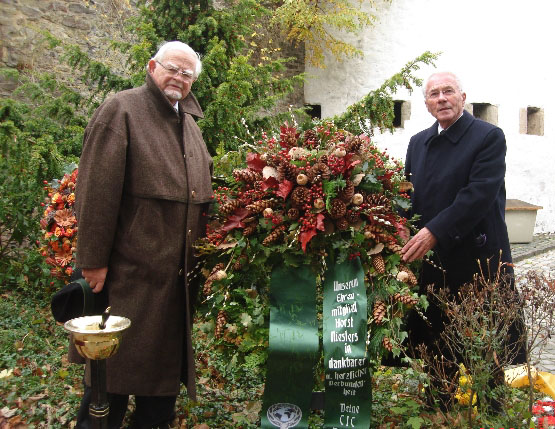 The wreath of the international CIC was laid down at the coffin by the CIC member Kurt Arentz and the falconer Peter Sapara (right). It included oak leaves, much liked by Niesters in his lifetime. These fresh oak branches came from a mighty oak tree in the park of the Noervenich Castle.

Condolences from all over the world

The grave was finally covered with the most beautiful bouquets of flowers and wreaths. The widow Ute Niesters received condolences from all over the world. By his personal presence at the funeral, the minister Ingo Wolf honored both the man Horst Niesters, as well as his life work. He was and remains "a great example for society", said the politician. Niesters has not only served a good cause with his wild-life preserve and breeding station, but he also contributed much to the prestige of the local area, as well the prestige of Germany.

The international Alexander Order Pour le Mérite for Science and Arts sent condolences from the United States: "Horst Niesters, as a Knight of the Order, remains an example for global cooperation in the service of international understanding and peaceful co-existence of the various cultures", wrote the Chancellor of the Order, Consul B. John Zavrel from New York.

On the day of the funeral, flags of countries of the West and East were flying at half-mast along the entrance road to the wildlife preserve Hellenthal. Among them was also the US flag, which reminded of the friendship of Horst Niesters with the US presidents Ronald Reagan and George Bush, Sr. In addition, the European Art Foundation, whose curatorium member Horst Niesters was for many years, ordered the flags of the European Union, Germany and France lowered to half-mast for three days in front of the Museum of European Art at the Noervenich Castle.