Alexander the Great and Bucephalus. 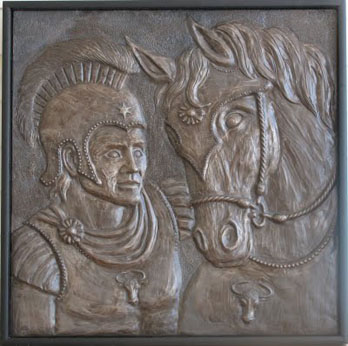 Philonicus the Thessalian brought Bucephalus to Philip II (Alexander's father) in the hopes of selling him. But when they went to the paddock to see the beautiful stallion, he reared and bucked and could not be ridden.

Philip wasn't happy with Philonicus for bringing him such a wild horse and declared that the horse was untamable and useless.

As they were leading the stallion away, 12 year old Alexander, who had observed that the horse seemed to shy away from its own shadow, asked his father if he could be allowed to exercise the horse.

Philip looked at Alexander, who seemed more inclined towards music and the arts, and said, 'None of my experienced riders can handle this horse so are you really telling me that you can do better? ' Philip wasn't impressed and only relented when Alexander offered to pay the full price for the horse out of his savings.

For days Alexander led the horse directly into the sun, so that it could not see its own shadow. Then Alexander gradually eased onto the horse's back and rode directly towards the sun for hours every day until horse and rider felt comfortable and seemed to find a common bond that would endure throughout Alexander's glorious military career.

When Philip observed the wonderful horsemanship of Alexander he embraced his son and said, 'O my son, look thee out a kingdom equal to and worthy of thyself, for Macedonia is too little for thee'.

Alexander chose the name Bucephalus for his mount because the horse's head was as broad as a bull's. The stallion was his faithful partner in battles throughout much of his military career and died of battle wounds.

Both Alexander and Bucephalus were badly scarred from their many battles. Alexander learned about cosmetics from French mercenaries in his army, and was able to cover up his facial scars.

Later the warrior was said to have founded the city of Bucephala in memory of his faithful mount.

Edgar Degas, French Realist/Impressionist Painter and Sculptor, 1834-1917, better known for his paintings of the ballet, also had a passion for painting horses, in which he saw the perfect balance of strength and graceful movement.

Degas painted three versions of the legend of Alexander and Bucephalus, two in oil and one in watercolor. One was painted in the 'grand manner'-- forty-five by thirty-five inches, which was a scale more appropriate for historic paintings. Degas kept this painting his entire life; it was in his studio when he passed away at the age of 83.